A Collection of Dreamscapes, by Christina Sng 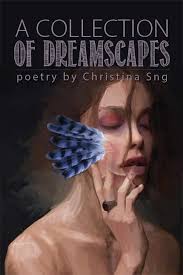 Years ago, I first stumbled on a poem of Christina’s in a small magazine. It struck me immediately how well she was able to cram so much insight and impact into such a compact piece. I knew right then that I needed to keep an eye on her. Now, she has a Stoker under her belt for her first collection and this new bit of tasty treats for my greedy eyeholes.


A Collection Of Dreamscapes isn’t a cohesive grouping of single-focus poems, but it isn’t quite as scattershot as a fully unthemed collection can be. Instead, it is cut up into five sections (The Love Song of Allegra, Fairy Tales, All the Monsters in the World, A Capacity for Violence, and Myths and Dreamscapes). Each section sets a thematic through-line for the poems in that section and gives a sense of continuity to it. I also dig that this breaks up what is a fairly large poetry collection into more reasonable meals.


One of the things CHristina has become known for is her ability to craft entrancing stories full of depth and meaning within her poems. She has this knack for giving the reader just enough on the page to build the images and plot in their head, while leaving enough unsaid that it is not dictated for the reader. Poems like “Never the Light,” which plays with the vampire myth while addressing abuse and the need to break from that cycle, do this marvelously.


Now, I will admit that some will be put off by the first section, The Love Song of Allegra. Especially those who are fans of her usually deciptively straight-ahead and trimmed down style. This section is clearly modeled on the myths of ancient Greece and the style reflects that. It is a little stiffer than her usual approach and can feel a bit more daunting. It fits well with the story she tells, and I enjoyed it, but may not be for everyone. The good news is that you can just skip by it if you want a return to her more typical style.


Overall, A Collection of Dreamscapes is exactly what I have come to expect from Christina: full of heart, personal, and powerful while opening up her view of the world to include a variety of different lenses and angles of approach. 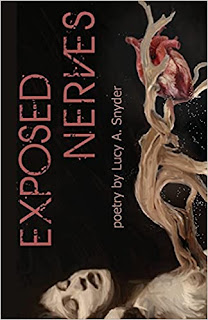 Exposed Nerves, by Lucy Snyder (Raw Dog Screaming); 2021. 105 pages. $12.95 trade paperback. $5.99 ebook I have a thing for Lucy Snyder's work. her last poetry collection, Chimeric Machines, is still a regular read for me. With this new collection, she makes it quite clear that she still swings those same solid brass ovaries with the same swagger. But there is a bit more comfort this time. A bit more self assurance. No less fire, though. Of that much you can be sure. To make things easier, I'll focus on five poems that i feel best encapsulate the overall feel of the collection. The Wrong Daughter This one is all about implication. There is a story here. Maybe sisters who keep getting confused and bad choices. That much is made clear. There is a cycle of abuse and rage and empty living. But there is so much of the tale that lays outside of the words on the page and I dig the heck out of that. It is a right doozy and is a prime example of why I love Lucy's work so much. The I 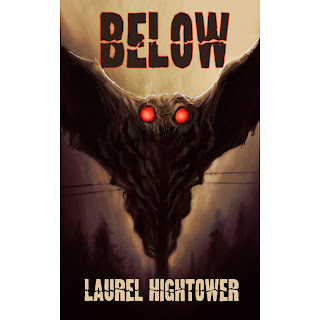 Below, by Laurel Hightower

I dug the hell out of Laurel’s previous book, Crossroads. It had that heart I am always looking for, a fair amount of fucked up and an attitude that took zero percent of my guff. So, of course, when I found out that she had a new one coming out, and that it involved Mothman, a damn hard cryptid to get right and make scary, I was down as a clown in D-town. Whoop fucking Whoop! So, the back page material is a little misleading. It makes it look like the story is primarily about our protagonist and her struggles to decide whether to put herself or a complete stranger first. Yeah, that is a part of the story. She is on a long drive, meets a stranger who helps her out, and he runs his truck off the road. She does have to decide whether or not she is willing to descend into the impenetrable dark of the hole his truck fell into and what she is willing to do to help him. But that is all just the start of her journey. This is really more of a story of her struggle with her own fears and her a 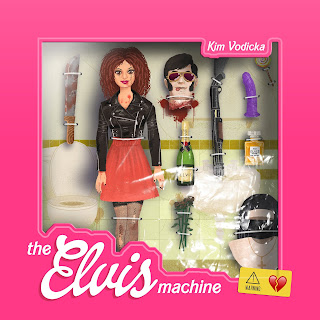 Most of you will discount Kim’s poetry right from the start. The poems are too dense for casual fans, let alone those who don’t usually dig poetry. Her line breaks are placed in jumps around the page. The images are weird. There is a superficial disconnect between individual stanzas that can make them look like bumper-stickers that were strung together. The poems are too fucking long. Then, the literate pedants will be put off by her vulgarity. There are too many dicks and pussies and gallons of cum, not to mention the titties and gonorrhea. I don’t imagine many of you will look much further that the admittedly fucking amazing cover art. Frankly, that is a shame. Her work is worth the work you have to put in. Yeah, I had to read most of these poems multiple times to even begin to suss out the sense in them. I had to weed out my own nonsense to weed through their nonsense. But what the fuck good in life comes easy? When you sift the images and metaphors and dig into the ideas,